In the second half of September Pars Komponenty took place at our northern neighbors in Gdansk, the annual international railway trade fair TRAKO.

Although only a year has passed since Innotrans last year, designers have already brought other products to the world.

Pars Komponenty, as one of the few companies, brought Trako, one year after the last presentation, with four more new products. The first is a complete sliding-plug fully electric door system. The second is the heated GAP FILLER, the third one STEPPER, which is a fully heated and fourth one the horizontally curved front double frame designed for CAF trains, the Boston project in the United States.

There was a lot of interest in the lighting LED profile – an element that Pars Komponenty have an industrial design. It is attractive, intriguing with security features and sophisticated in detail to avoid its error even when the weather is outside.

The Pars Komponenty exhibition was visited by the largest players on the market, as well as by the Czech, Slovak, Polish and German railway operators, with some projects being agreed upon. There has also been a shift in cooperation with an Indian partnerNegotiations took place with existing and new customers and suppliers.

Throughout the fair, was present The Founder of Pars Komponenty, Ing. Vladimír Vyhlídal with his family, top managers, designers, technology and commercial team.

Next stop: INNOTRANS 2018. We are looking forward.

“Thanks to everyone for nice and beneficial meetings at this year’s TRAKO! We were honored! “ 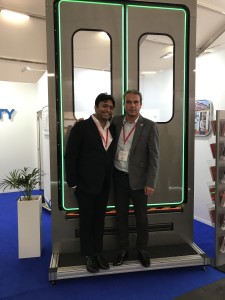